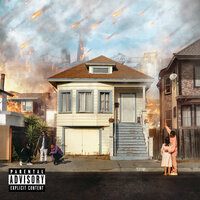 It was crazy like, livin’ on 10th because
Like when my grandma came from the Philippines
That was the first place she was at, and she never left
I’m just thinkin’ about all the shit that had happened
When a nigga was like, on that porchWalkin’ from my uncle’s real slow, I was fucked up off an edible
Playin’ Tekken with the precious terrible
But I looked up and was like damn, there she go
I used to fuck yo’ homie now I can’t
You gave me that pussy from the gate
Thеy always say you shouldn’t fuck on first dates

Stoop kid won’t leave this stoop
I couldn’t believe it too
I just know that I could never see this through
In the outside, gotta go outsideI seen graffiti spray on this porch, .223’s make him lay on this porch
My daddy asked if I was gay on this porch
Cause I was fuckin’ hoes when he had court
Then that nigga went to jail he left the porch
Sendin’ me drawin’s from the cell to this porch
It seemed like he was nailed to the floor
I seen my auntie high as hell at the door
Asked her for money, she was high she want some more
Her son is like my lil’ brother, we not poor
So when Sonny come around he secure
I had my lil’ brother back on this porch
Can’t talk to chance, you ain’t comin’ through this door
Shoutout my titi’s April dyin’ and support
Shoutout fuckin’ Jigga Juice I love you more
R.I.P Greg your porch was my porch
Pardon me amor, yeah, pardon me amor

If stoop kid won’t leave this stoop
I couldn’t believe it too
I just know that I could never see this through
In the outside, gotta go outside

Aye, first of all shout out to all the YB’s
Like every single one, Darian, Skyler, Von, Otis, Juice, me, Tay
More importantly, uh Jason love you dawg, yeah
If we talkin’ ’bout music
Me and my niggas was the first niggas in Oakland
We was the only group, after Go Dav that popped
We started throwin’ parties, niggas thought we was rappin’
It was crazy ’cause nobody had more bitches than us
The only niggas that was competing us, was the otherside niggas
They would then grow up to be different things
And then one of them niggas was a star, so shoutout to ALLBLACK
I would then go to San Jose, and see my big cousin Kwame
And my brothers Christian and Cole
Puttin’ it together the real way
‘Cause if it’s one thing me and them niggas gon’ do
It’s put it together for real
Shout out to niggas that came before me that put me on
Shout out Sue for bringin’ me to the studio
Shout out Cool John for tellin’ niggas that I was tight
And I had bitches, so they would let me in the studio
Shout out, shout out Lani
I remember Lani was nigga, crashin’ on my couch
I remember I picked up her
And this dude in Berkeley, she was like let’s go pick up
My cousin and we we just talkin’ in Berkeley
And her cousin, this nigga named Benji
End up livin’ with me bein’ my day to day
That’s like eight years ago
That’s what that’s what the whole focus of this album was
Was eight years ago, uh, to not, I mean
At the recording of this, but whenever you hear this, whatever year you in
I just hope you feel the authenticity
‘Cause this the first song that I really cried on
Since I recorded the outro to my last album Dior Deposit
But now we, we past Dior Deposits
Dior Deposits was about the work that a nigga put in
Like literally the deposits I made in the bank to afford Dior
We didn’t have Dior, we done lost it, we done sold it
We done put it on Depop, !llmind mighta put it on eBay
You know what I’m sayin? We we past that now it’s about
It’s about the maintenance, so I’m reflecting on
Before I had anything to maintain
Because, in the world where we got pandemics
And quarantines and niggas can’t even go to role
Or make money how we used to
I needed to make this album for myself
So I could get past it, i was thinkin’ about you know
My ex Asia, everything was a muse, for me, especially her
My baby Chi and my mama, you know what I’m sayin’?
Shout out Township’s, shout out Sam Lancaster
That nigga changed my life, and it just so happen that he White
‘Cause that nigga subscribed to mo’ Black magazines than everything
Shout out James Delgado, you barely produced anything on here
But you main producer, and I got a lot of love for you
‘Cause you finesse me
They can watch the interviews for that explanation
Shout out Paul Middleton, you right here next to me
We recording the video
More importantly, eleven seventy six
Is the address of the house I grew up in, in West Oakland
So shout out to West Oakland, shout out to my grandpa
Douglas, that’s my, that’s my ugly ass middle name
Akeem Ali Douglas Hayes
Shout out to Douglas for meeting my fine ass grandma
In the Philippines, in the middle of Subic Bay
‘Cause he was in the Marines and, uh
He seen her and said, “Ayy baby, I need something, I need something in my pocket
Can you do that for me?” And you know what she said?
“Oo-oo,” hella Filipino, no English
And then he end up marrying her ass, and moved to California
They would have a baby, three babies
And the youngest of them three babies
End up making the Guapdad
So if you enjoyed this Guapdad album
That’s the Guapdad backstory, peace out